You’ve seen them in infomercials, and stores. Maybe you’ve even considered buying one. But are there any disadvantages of an electric skillet?

Like any small appliance, electric skillets have many advantages but you should also be aware of the disadvantages. Here are a few things you should know before you buy one.

Disadvantages of an Electric Skillet

Almost all manufacturers of electric skillets will provide a list of instructions for safe use. It is important that these directions are followed to avoid any accidents.

A second electric skillet disadvantage for cooking is the potential for uneven heating. Because of their design, it can be difficult to evenly distribute heat when cooking with an electric skillet.

This means that you might end up having to move food around the skillet to ensure everything cooks evenly. If not, you may have areas of your food that are overcooked while others are undercooked.

We’ve just discussed the potential of electric skillets to have uneven heating. However, there is another heat-related disadvantage which is sustaining a set heat level.

Almost all electric skillets include a temperature control dial that ranges from approximately 250 degrees F to 450 degrees F. When you’re cooking something for a sustained period of time you need the set heat level to remain. 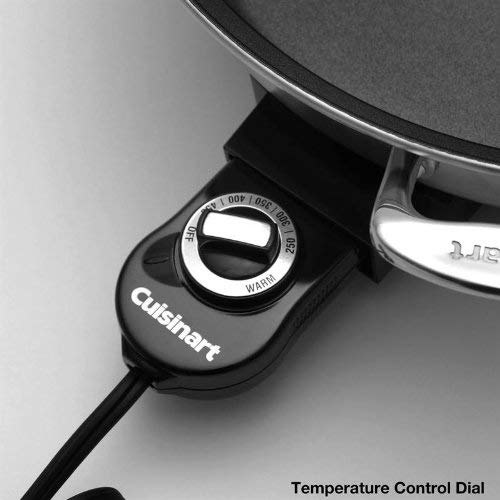 There are many reports of electric skillets not maintaining the set temperature. For instance, you may need to maintain a temperature of 375 degrees F to make a big pancake breakfast.

However, the electric skillet may constantly dip down almost 100 degrees lower out of nowhere and delay your cooking efforts. That’s no fun for anyone.

Electric skillets can also be difficult to clean. Many brands state you can place the pan of the electric skillet into the dishwasher once the temperature control dial is removed. Unfortunately, this isn’t a practical cleaning solution.

I would definitely be nervous about any water remaining in the receptor after dishwashing an electric skillet. Can you say safety hazard?

When washing them in the sink, many of the larger skillets are just too unwieldy. And again, I’d be nervous to submerge the electric skillet and risk getting water trapped in the electric component.

Lastly, an electric skillet disadvantage is the cost. There are budget options in the $20 and $30 range – but you certainly get what you pay for.

If you want to combat some of the disadvantages we have noted above you’ll need to opt for a stainless steel electric skillet which we’ve seen as high as $200. Wowzers!

Are There Any Electric Skillet Advantages? 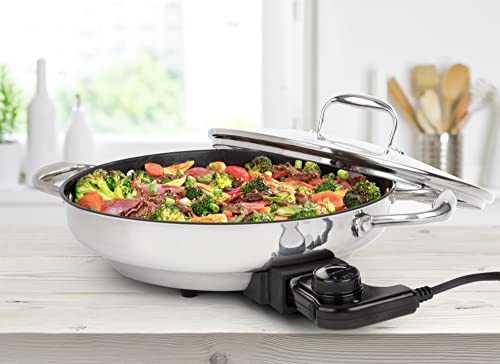 Okay, let’s get to the good. I hope the disadvantages didn’t scare you off because there are a couple of worthy electric skillet advantages.

You certainly cannot just grab your stove to cook elsewhere. With an electric skillet, you can cook in places where there is no access to a stove.

Here are a few places in which it would be helpful to have an electric skillet:

Remember, to be sure the use of a small appliance is allowed in any of the above places to avoid any issues beforehand.

3. Doubles as a Food Warmer

How Do Electric Skillets Work?

Electric skillets are designed to use electricity to cook food in a flat surfaced pan. They use a temperature control dial labeled in degrees to set the desired temperature.

The temperature dial alerts you (usually by an illuminated light) to let you know that the set temperature has been reached.

They can be used for cooking, sauteing or grilling. Basically, anything you could do with a regular stovetop pan.

So, should you buy an electric skillet?  I’d say yes because they’re a great arsenal to add to your kitchen and can be a great tool for cooking when you don’t have a stove available.

Before you buy one, consider whether or not the cons listed above are deal breakers for you. If not, then go ahead and add an electric skillet to your kitchen collection!